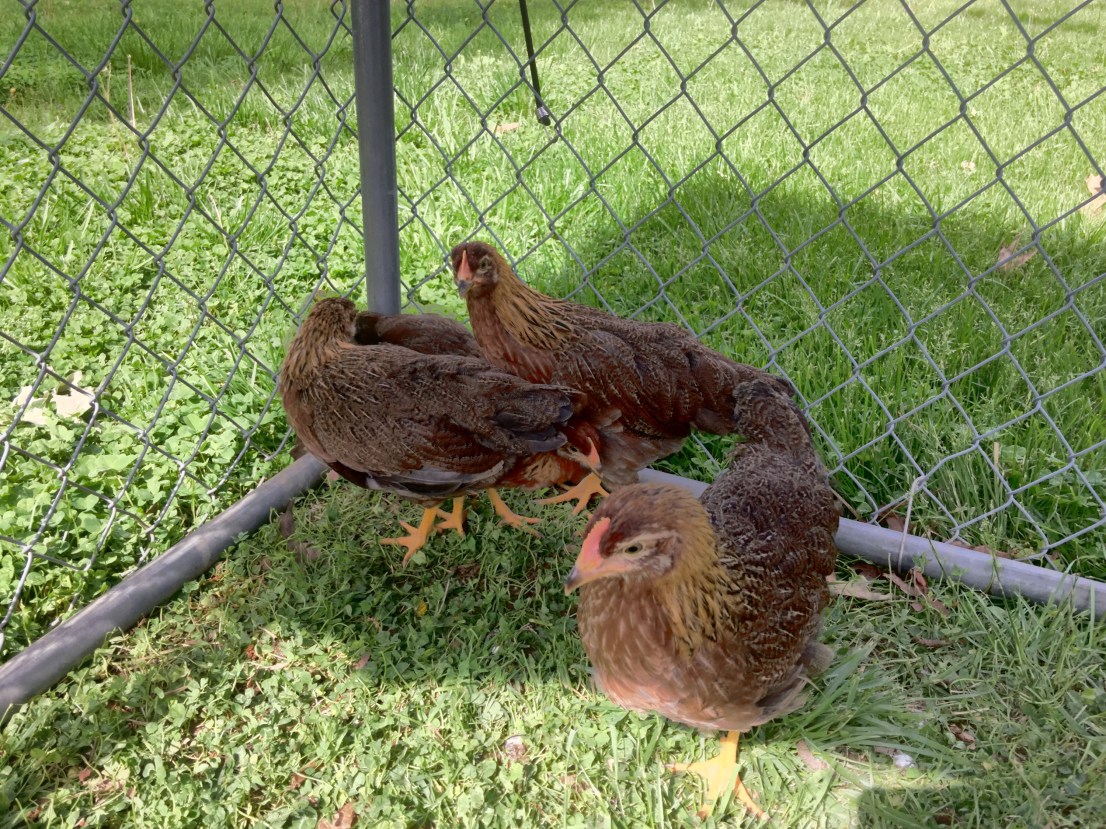 The shorter days seem to finally be making a difference in the egg production here at the homestead.  Even so, we still had 38 eggs layed this week.  The Rhode Island Reds are showing their winter laying ability though, with twenty two eggs for the week, or 5.5 eggs per hen.  The Easter Eggers are really beginning to drop off, as they only laid 16 eggs, or 2.7 eggs per hen for the week.

We are expecting the coldest weather of the season this week, getting into the mid-twenties by Thursday.  I am not worried at all about the birds at that temperature, but I am thinking ahead to when it gets down in the teens later in the year and what I will be doing to help protect them.

If you have never owned chickens, you might find it hard to believe how entertaining they can be.  Yesterday Charity put some leftover spaghetti in the run, and one of the ladies ran in there and starting eating it.  Charity said she was eating it like she would a worm.  She would pick it up, swing her head around with it in her mouth, then eat it.  I am supposing she either thought it was a worm, or she thought it was fun to pretend it was a worm.  Silly hen.

Speaking of personality – when Charity let the hens out yesterday, one of our cats decided to go check out the chicken run.  Charity laughed as she told the story because the cat didn’t stay in there long at all.  It is funny because this cat is a bird killer, but she won’t touch these chickens.  I sometimes wonder if she is thinking God might be punishing her for killing all those birds throughout the years by surrounding her with ten large birds that are bigger than she is.  😀

Whew, last week was a whirlwind.  So much so that I never even got around to sharing the record the ladies set last week.  Can you believe they jumped up to 48 eggs‽  That is nine more than their previous week!  Unfortunately, they didn’t hold that kind of record again this week.  Even so, they still produced 43 eggs, which is nothing to sneeze at!

The big event for the chickens this week is that I had one of the ladies who was egg bound.  I am glad this happened while I was home.  I first read up on it on Backyard Chickens and The Chicken Chick.  My initial plan was to let it go for a bit and see if she laid the egg, but after further reading I decided the best time to act was now.  SIGH.

I began by just holding her and trying to calm her down.  She quickly seemed comfortable in my arms as I felt her abdomen to see if I could feel an egg, and indeed I could.  I had one of my boys begin to mix some oyster shells with water, which we would then give to her with a syringe to increase her calcium.  It seem this is one of the causes of a hen being egg bound, as calcium is necessary for contracting muscles.

While my oldest son was helping me with this, my youngest son was filling our bathtub with warm water to give the hen a warm bath.  As crazy as this sounds it helps the hen relax, which often helps them expel the egg.  As I walked toward the house to give her the bath, out popped the egg along with a second one that was not yet fully formed!

I carried her down to the hen house, and after setting her in there she seemed to need a few minutes to recooperate.  Later in the evening she seemed back to normal – potential catastrophe averted.

Had the calcium and bath not worked, things would have gotten more interesting, as we would have had to put mineral oil on her vent.  The problem is not just that she wasn’t laying her egg, but for chickens the vent the egg comes out of is also the vent they defecate from.  In other words, this animal that normally poops every twenty minutes couldn’t go at all.  Ultimately, in the absense of fixing this, she would have likely been dead in a couple of days.