Stop. Take ten minutes and watch this video. Wow. My mind struggles to understand this even after seeing it.

Simple as Riding a Bike

Riding a bike is simple, right?  Not so fast, hotshot!  It seems it is far more complicated than we think, and there is a lot we can learn from that.  Check this out:

Man in the Maze

I am a capitalist – someone who embraces the free market, but things like this video disgust me. Enormous amounts of food are being thrown away as the prices fluctuate up and down while folks are hungry nearby. What a shame.

I ran across this video of money-saving tips a week or two ago, and I thought it was worth sharing here. I especially like the one regarding eggs, since there is such a reduction in egg production in the winter.

I am a bit weird – no one has to tell me that.  I get the biggest smile out of these prank videos with professional drivers though.  I could watch the one with Jeff Gordon in it over and over.  There is a new-to-me one out there though, which has a lady and a man who have met as a blind date, and she ends up taking the man for a ride in her car.  Oh my!  This is just too funny!  Enjoy speed dating … 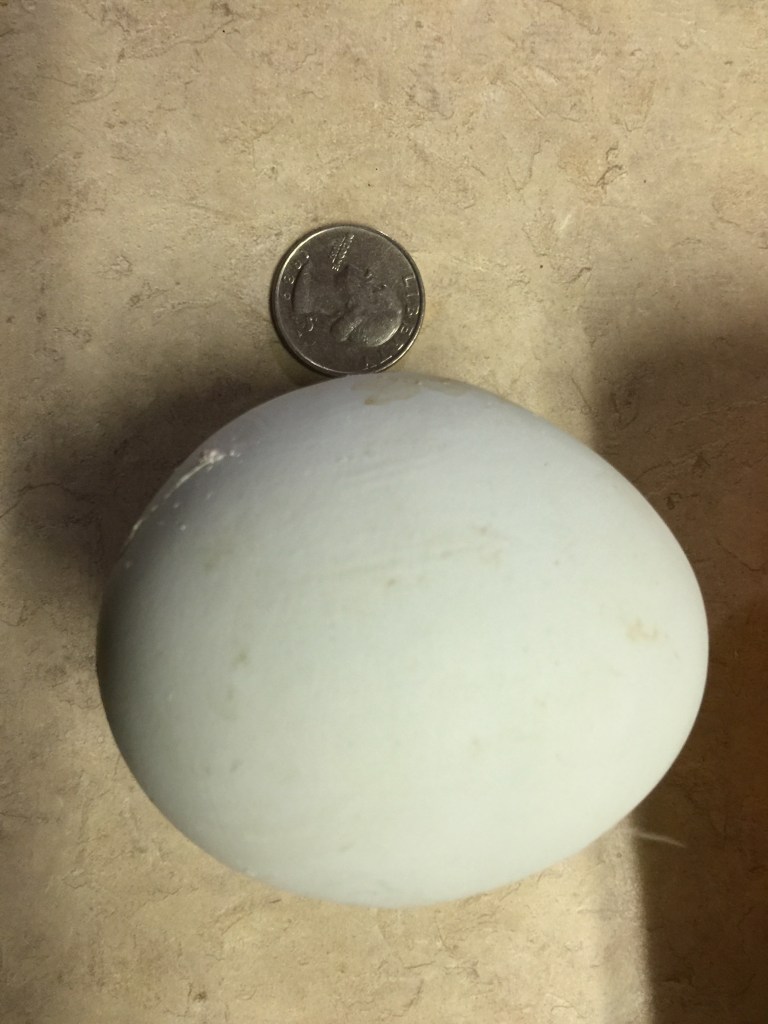 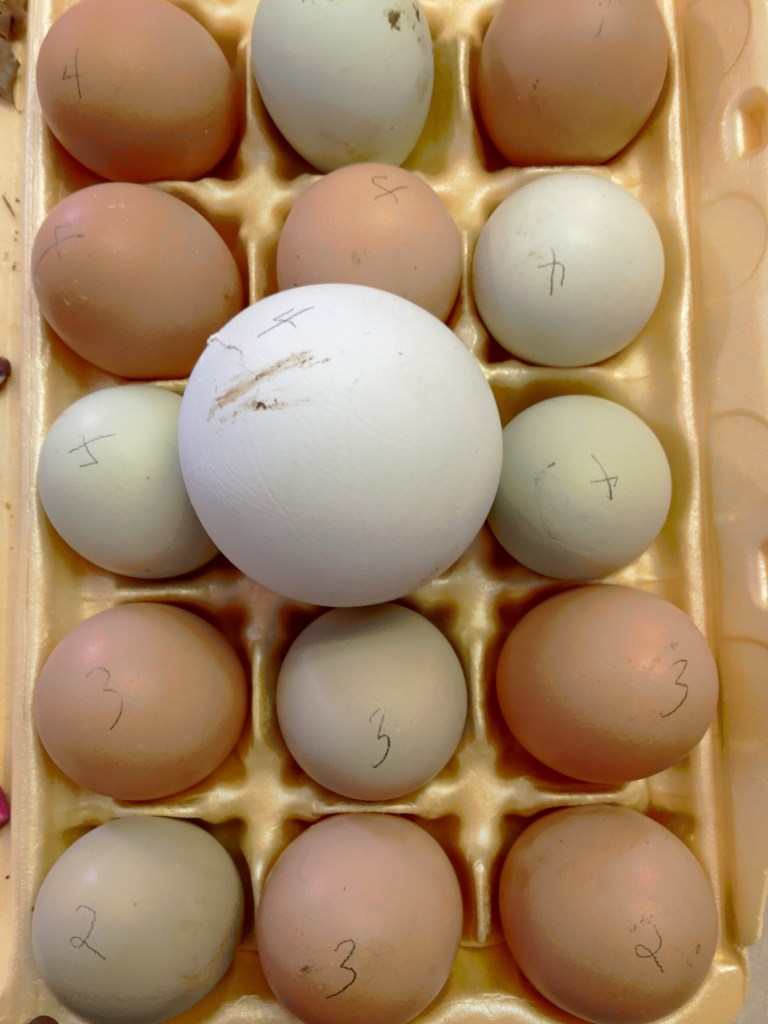 Happenings Around the Homestead – The Yogurt Edition

Will this winter ever end‽  The bitter cold temperatures have continued this week, though they have been sandwiched between some warmer days.  That means we have had some rain, some melting, some freezing, some snow – sheesh.  While some of the country is used to many days of snow-covered ground, we aren’t here in western Kentucky.  What makes this worse is that it seems we are going to have a wet few weeks now, which will make the ground an absolute mess.  Candidly, this makes me thankful I have went with the Back to Eden Garden type this year.  Those wood chips are going to be a lot easier to work with than mud, that is for sure.

The two things I have worked on this week is finalizing what seeds and plants I need for the spring and making homemade yogurt for the first time.  I’ll spend much of this post on the latter of the two.  The seed ordering had to be done though – we are nearing time to start planting peas and other spring crops, yet with the snow on the ground it isn’t happening just yet.  Perhaps this week I can get some seeds out.  I could probably wait up to two weeks and still be okay, but it is time.

Now, on to yogurt making!

This is something I have wanted to try for a while, but I have just been a little intimidated by doing something new like this.  However, I am eating clean again, which for me is very low carbohydrate.  This means I am avoiding anything low fat, and most storebought yogurt is just that – low fat.  So, I decided to make some of my own.  Basically, the recipe that I used is as follows:

While some would say it is not required, it is advised that all utinsils you are using to make yogurt be boiled beforehand and allowed to air (or oven) dry.  This is to reduce the chance that other bacteria will get into your yogurt mix, thereby ruining it.

Heat the 1 quart of milk to 185° F, constantly stirring.  Once it reaches 185° F, remove it from the heat.  Some folks say you can speed cool this by placing a container with the heated milk in cool water, but others say to let it cool on its own.  Once it reaches 100° F, you can add the yogurt.  I recommend two things though.  Wait until it cools to room temperature.  This leaves no room for error.  If your milk it too hot, it kills the live cultures in the yogurt.  Second, I mixed the yogurt in with some of the milk, 1/2 cup, before mixing it into all of it.  It seems to help it mix better.

Once you have mixed the yogurt with a small amount of the room temperature milk you just heated, then mix it in with the rest of the pan.  Stir well.  Now, pour the mix into a container (I used 1 quart canning jars), cover the jars (I used plastic wrap and a rubber band to hold it on), and place them in a place to allow the cultures to grow.  This could be in an oven with just the oven light on, or you could use a yogurt maker.  I chose to put them in our Excalibur Dehydrator on 100° F.  The key is keeping it between 95° F and 110° F.  Outside of that range it may not work.

The yogurt is technically done after 8 hours, but you can let it continue to ferment for up to 24 hours.  Going longer than 24 hours is playing with fire though, as the bacteria will run out of food (sugar) soon after that and begin to die.  Why would you choose a shorter or a longer time?  The longer it ferments, the more tart and thick it will be.  It also will have less sugar left, as the bacteria continue to eat the sugar until it is all gone, at which time the bacteria die.  Ideally, I am trying to achieve just this: as little sugar as possible.  As such, I let mine cook for 24 hours.

Once you remove the yogurt, place it in the refrigerator to cool and thicken.  It may or may not be as thick as what you get in the grocery store, as most of the grocery store yogurts have thickening agents added.  You can do this too with pectin or another thickener.  I chose to not do this.

First off, I made three batches.  Now one thing to realize is that you can make yogurt with many things, it doesn’t have to be just milk.  As long as it contains sugar, the bacteria will grow.  The three mixes I chose are as follows:

Technically, if you just use heavy cream, you will end up with sour cream, but I wanted some of the thickening that the heavy cream would provide.

So, I started with these two ingredients for the first two batches: 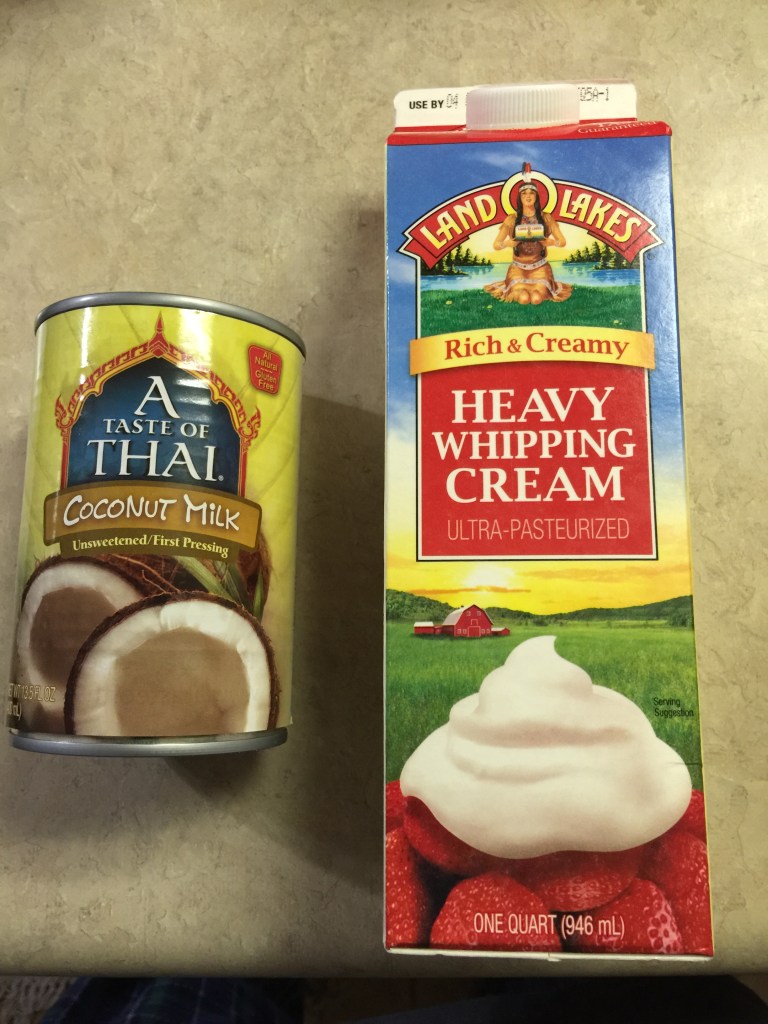 Once mixed together, this stuff looked pretty nasty.  😀 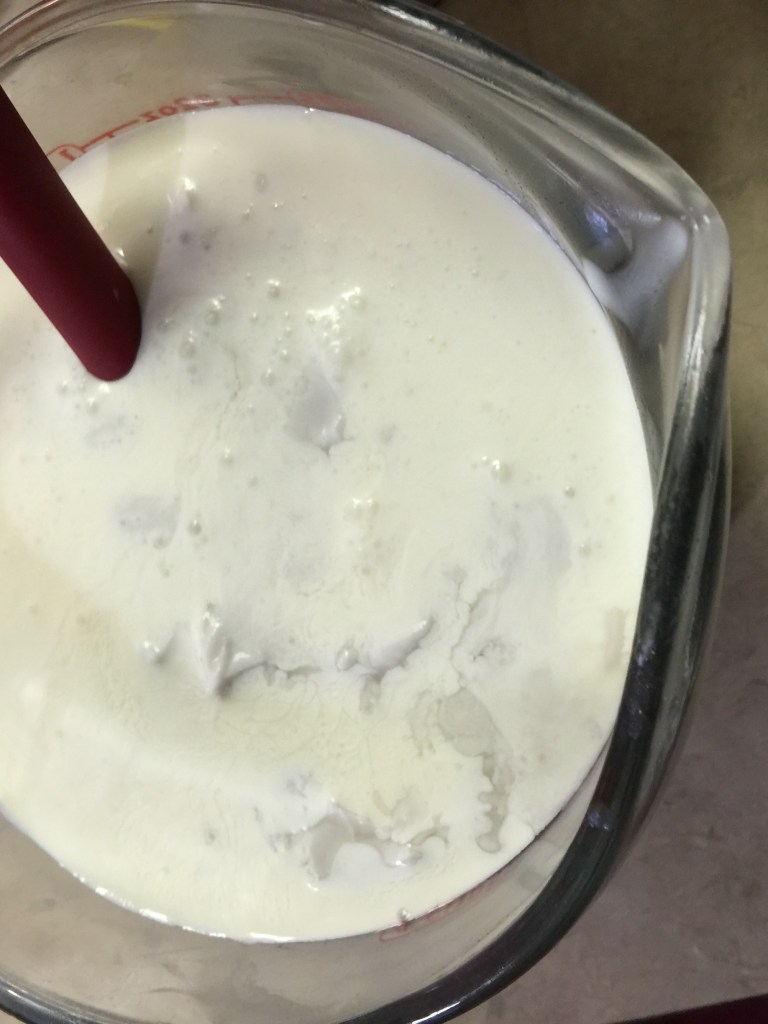 While cooking, I used a candy thermometer along with constant stirring to be sure it didn’t stick and that the temperature stayed correct: 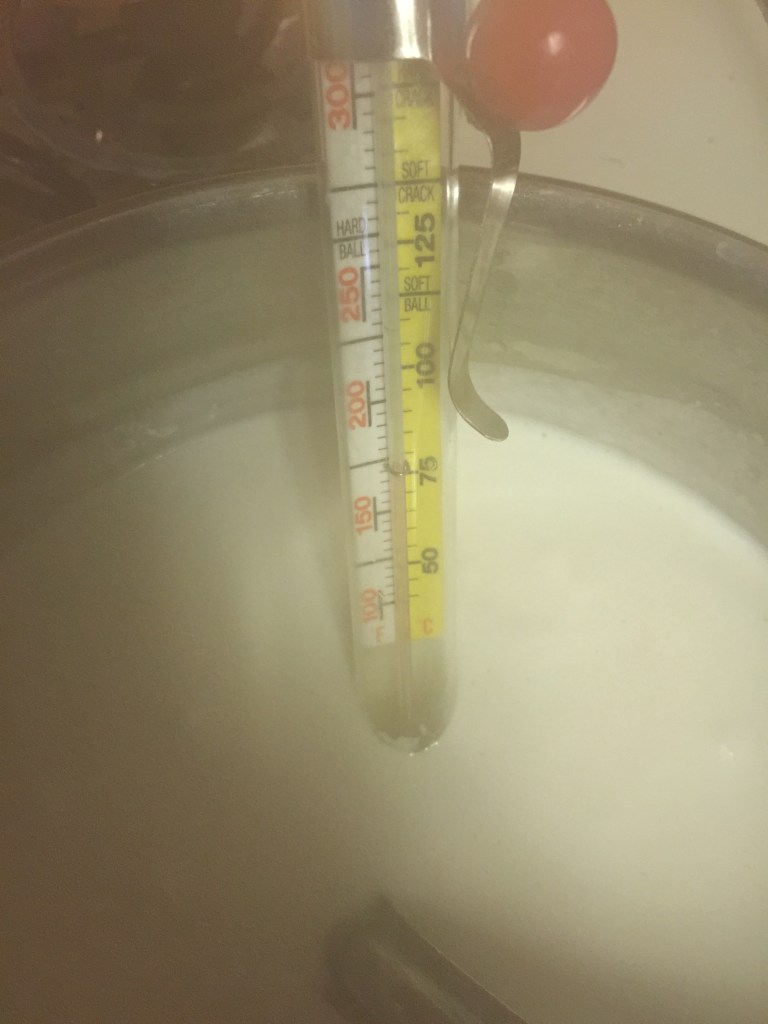 Once it was done, I place the jars into the dehydrator to ferment: 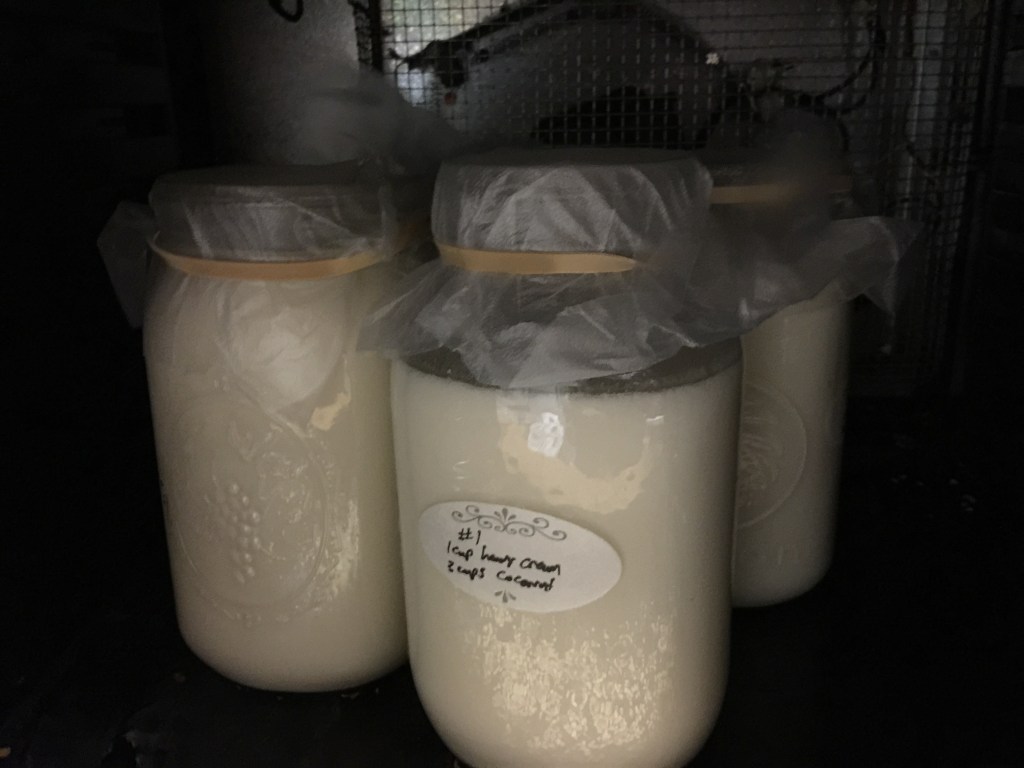 The milk and heavy cream ended up being the most thick – check this out! 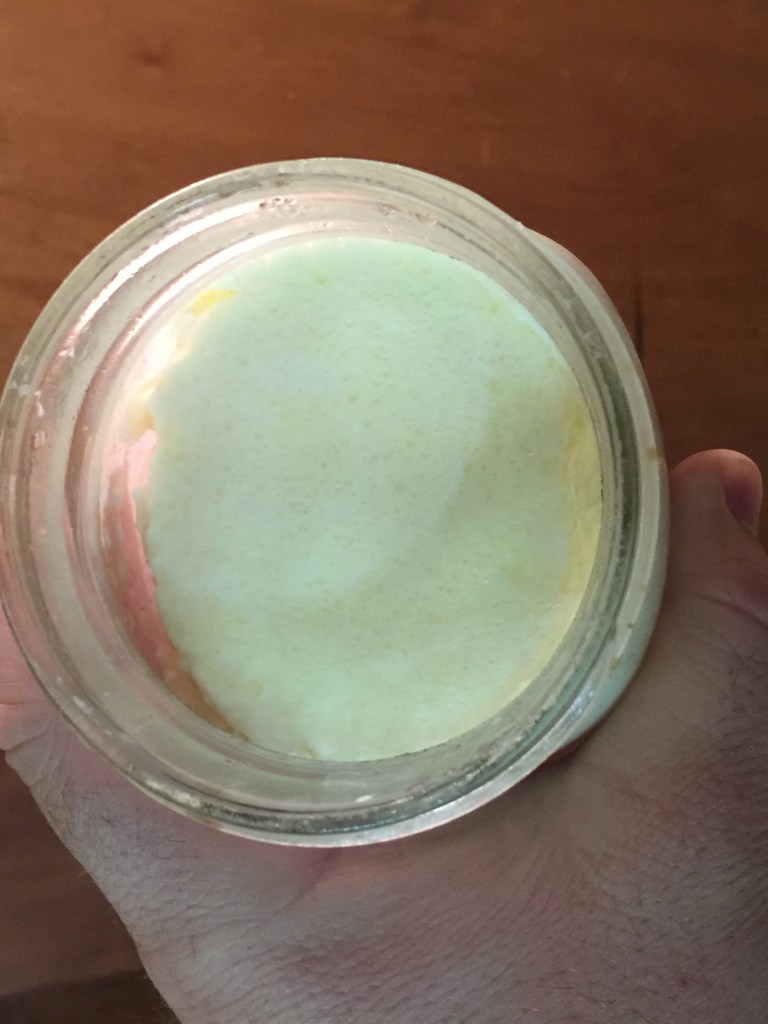 That is not a table behind the yogurt – it is a door!  That is being held sideways!  It smelled somewhat of cream cheese.

The other two looked good too, though the one made with the most coconut milk is the most thin, and it could not be held sideways at all. 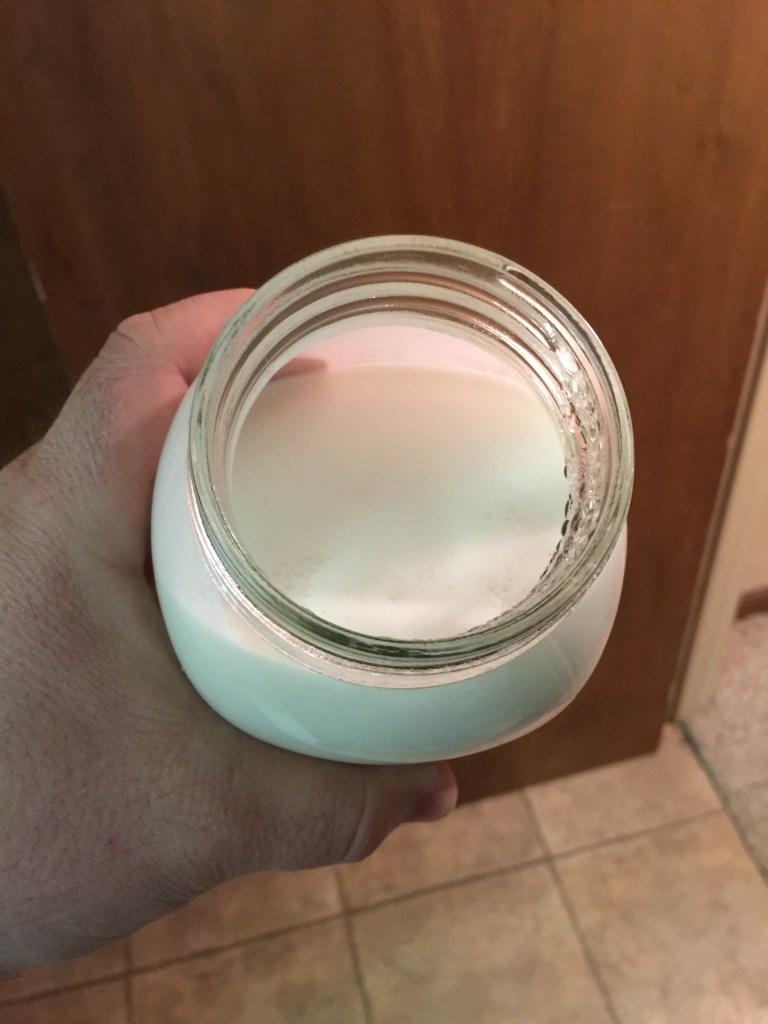 Candidly, it was milkshake thick.  Here is the one with half coconut milk and half heavy cream: 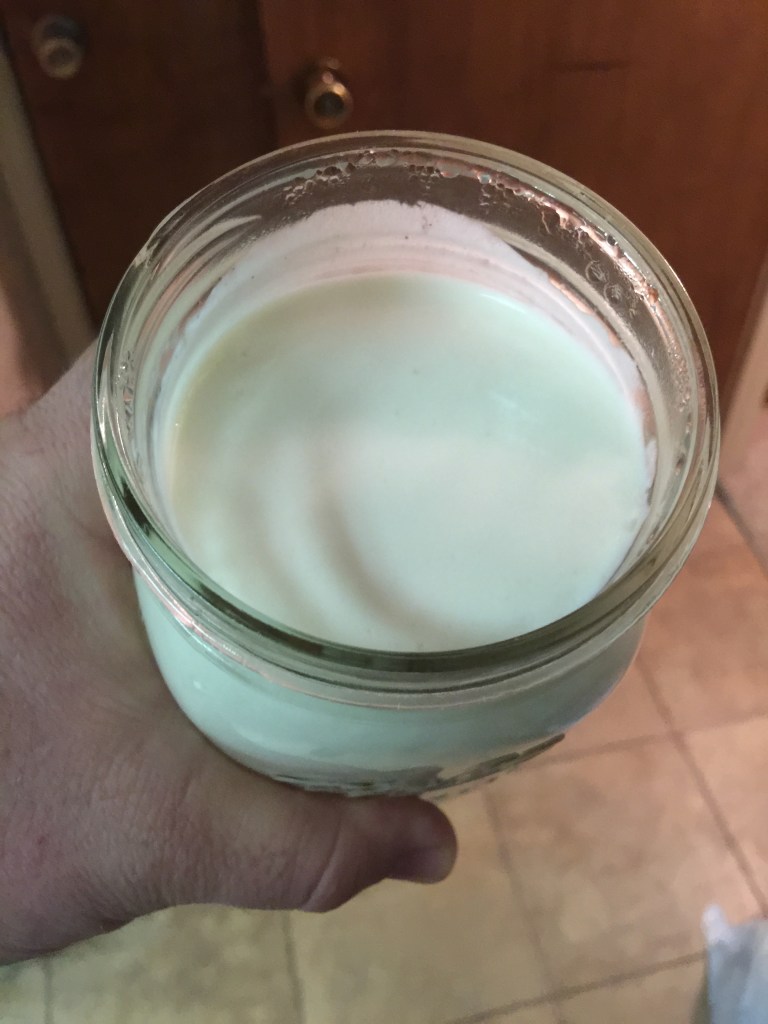 Half and Half – Heavy Cream and Coconut Milk Yogurt 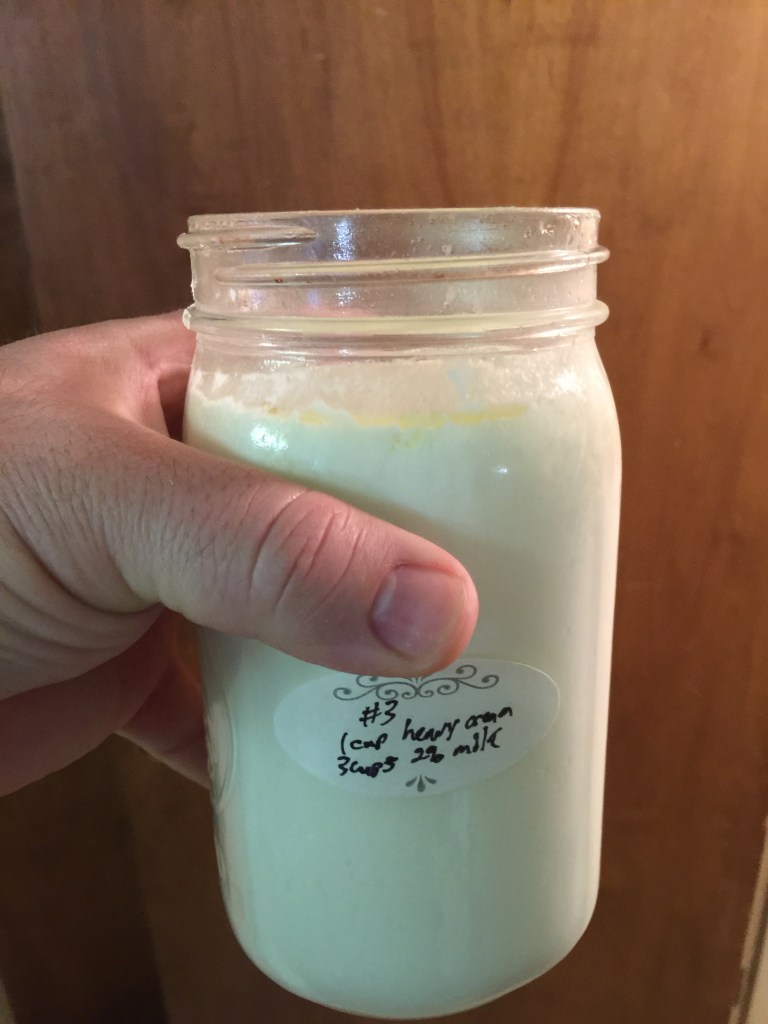 Okay, I am sure you are all interested in how it tastes.  I decided to do a taste testing video for you.  Here goes:

How to Peel Egg

I am always fascinated by the videos and tutorials on how to peel eggs better.  Yes, I am easily humored, I know.  Seriously though, the OCD in me goes nuts when an egg doesn’t peel well.  I have read in more than one place that fresh eggs would not peel as well as older eggs, but I am not finding that to be the case.  Since I have been cooking fresh eggs, I have found the eggs are peeling significantly better.  I can’t help but to wonder why that is.  Even so, I am still always on the lookout for a better way to peel eggs, and this one intrigues me.  In fact, I plan on giving it a try this morning.  I’ll report back here before this post goes live.

How to peel an egg.

So the results are in – this works!  It isn’t quite as smooth as the video seems to indicate, but it does work without tearing the egg up.  I’ll be using this method going forward, at least until something better comes along.

I cannot tell you how impacted I was by this video. The act of doing something kind for others is often so simple, yet so ignored. It can make a profound difference on the life of someone else though. How often is something within our power, but we withhold the blessing due to greed?

Matthew 5:16 In the same way, let your light shine before people, so that they can see your good deeds and give honor to your Father in heaven.

I hope this touches you as it did me.

Bees and Beekeeping with Honey Flow

One thing that has long caught my interest, but I have never really pursued is beekeeping.  I have gone so far as to have a friend show me his hives, at which time I got stung.  😀  That is a story for another day though.  Anyhow, I want bees.  I have looked at several options, including top bar hives and traditional hives, but on Monday I came across what I think is a great option: Honey Flow!  To be fair, this is not so much about the hive, but it is about the frames, which allow you to gather the honey without opening the hives.  Awesome, right‽   This goes live on Kickstarter next Monday, and I plan on checking it out as soon as it goes live.  If the price is reasonable, I expect to be making my first investment in beekeeping on Monday.