Whoa! Spring is here!  As I said yesterday, you can tell it in the weather, and the ladies must be able to also.  They are really increasing egg production!  We now are getting 8 eggs a day most days again.  Here, the totals speak for themselves.  The Rhode Island Reds laid 20 eggs and the Easter Eggers laid 30 eggs.  That is a total of 50 eggs or 5 eggs per bird per week.  Not bad!

Speaking of birds, the Welsummers are really growing!  It is hard to believe that they will have their feathers in just four more weeks, but I guess that should make sense, as we saw tail feathers for the first time a few days ago.  I cannot wait to get them out with their sisters in the pen, though I suppose that is some time away.  As I understand it, we will need to allow them to get to know one another first so they don’t get injured by the older hens.

Yesterday I wrote about the new run.  I have a few chicken projects underway, this being one of them.  The idea was this: a portable run that is lightweight, yet strong.  It must also allow the hens plenty of space so they can stay in it for long periods of time without overcrowding.  I must be able to move it at least once a week to keep the grass from being destroyed in any one area in the yard.  So, here is what I came up with: 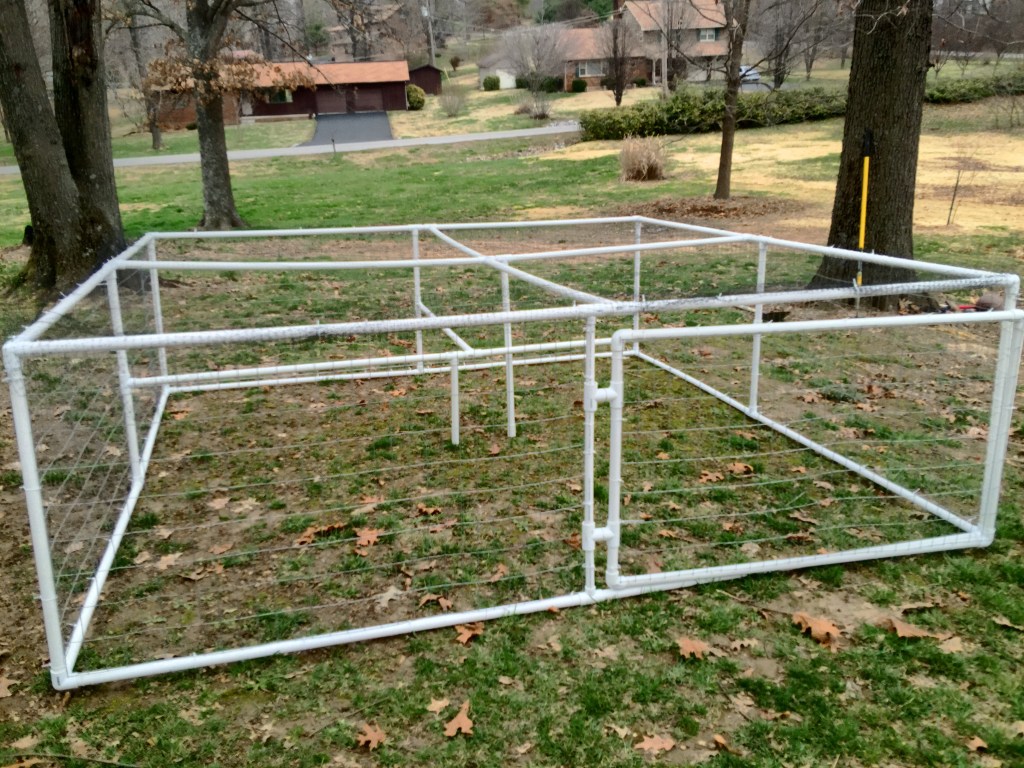 This was made with 1″ PVC pipe, 2″x1″ fencing, and a 14’x14′ piece of bird netting for the top.  It is 10’x10′, which is more than enough run room for the fourteen total birds we have.  It is best to give them 10 sq. ft. per bird, which this is short of, but combined with what they already have and the movable nature of this, it will work.  Once you see the next project, you will understand why I say that.  A last minute addition was a roosting bar made of PVC on the inside.  This not only gives the birds a place to roost, but it adds stability too.  I don’t know what it weighs, but one of my sons and I can move it.  It is easier with four people though.  I am sure my neighbors are wondering how much more stuff I will put in my yard, but that’s okay.

As I said above, I have a few projects underway.  This was one of them.  I would also like to extend the chicken run under the coop on the south side, but that is the last project.  Before that comes, I have another secret project that I will share as I get closer to doing it.  Many of you already know what it is though, as you have seen others doing it and have shared it with me on Facebook.  😀

View more posts from this author
« Man in the Maze
Happenings Around the Homestead »
Fatal error: Uncaught Exception: 12: REST API is deprecated for versions v2.1 and higher (12) thrown in /home/content/62/4469462/html/365daysofme/wp-content/plugins/seo-facebook-comments/facebook/base_facebook.php on line 1273