Whew! This was a big week for the chickens!  Saturday was a beautiful day, which could mean only one thing: it was time to get one of the run extensions built!

To give a little history, I have long wanted to build a northern and southern run extension, which when done would triple the run size, allowing the chickens more room to roam when we can’t let them out to play in the yard.  Ultimately, I would love to get to a point where these could be moved so we could actually let some grass grow in a spot, move the run on top of it, and let the chickens eat the grass.  😀  Anyhow, that is a long way off.  This weekend was time to build the Northern Run.

First, I had to get the materials.  People often laugh at me when they see me leaving the home improvement store with 2x4s heading to my economy car, but let me tell you, this little thing can haul stuff!  No, it is not a pickup, which I dearly want, but it it does the trick.  Look at my Toyota Matrix loaded up with 20 2x4s and other building materials! 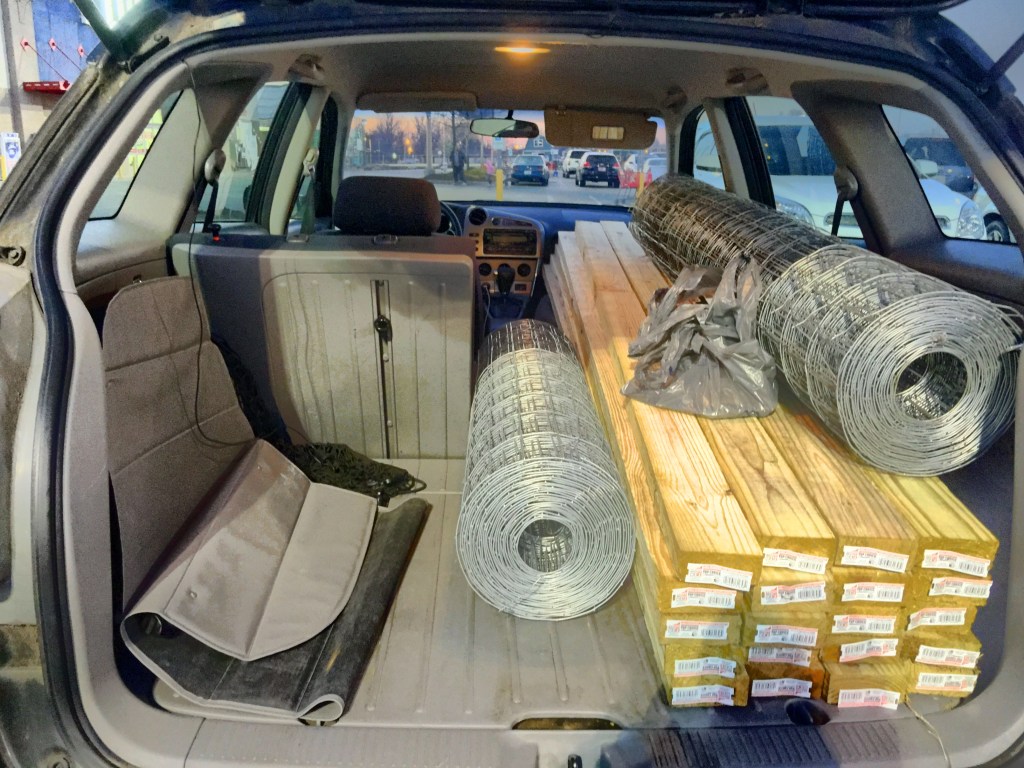 The Materials in my Amazing Matrix

So I decided to build this run much more sturdy than originally planned.  My original plans were to make this modular, meaning wall panels that could be easily moved, but I decided that a semi-permanent extension was better.  When I say semi-permanent, that doesn’t mean immovable.  It just takes at least two strong people, if not four.  Here’s the eastern and western walls, which provide the basic strength for the run extension: 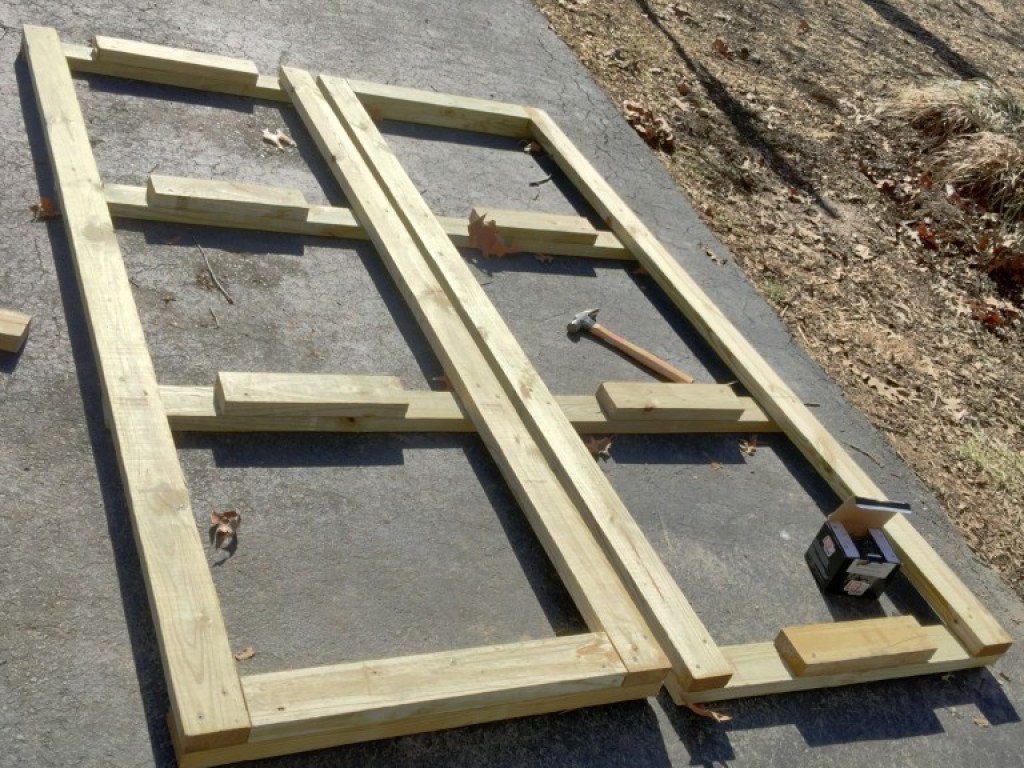 The East and West Walls

It wasn’t long until I had this thing framed up and ready.  You can see by the looks of this, it was not light at all!  It is 6.5 feet wide by 8 feet long. 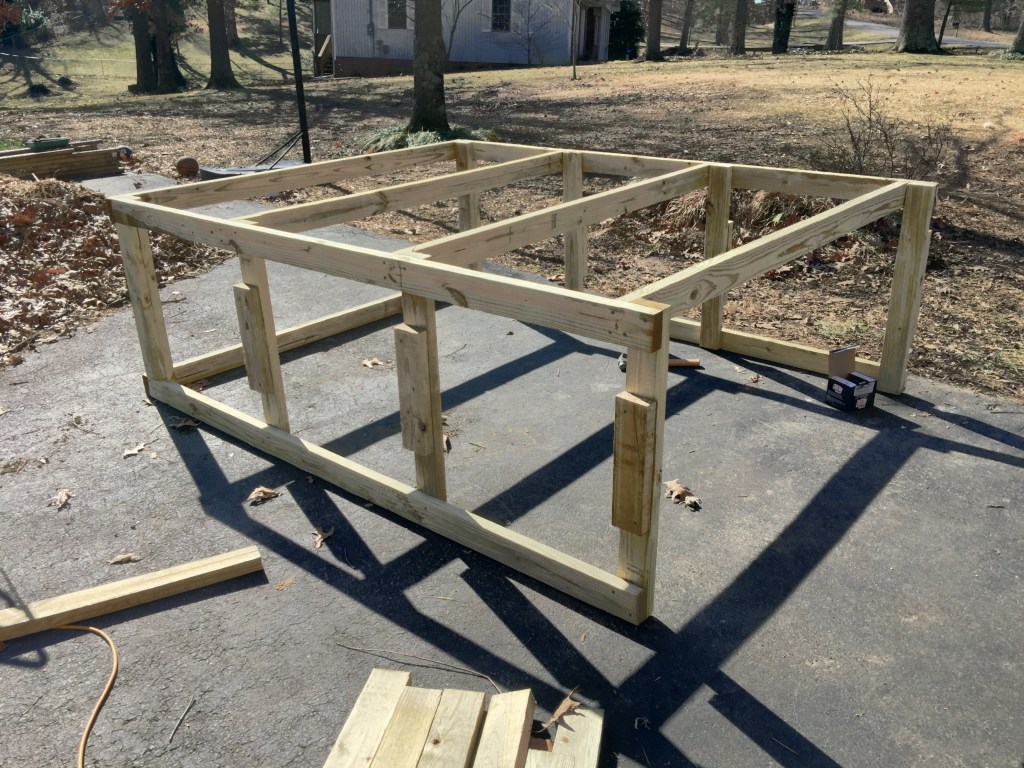 One of the main things I wanted in this was a feeding door on top.  The original run has doors on the northern and southern side that lift up.  While this is fine for letting the birds out to play, it isn’t so convenient when you just want to throw some scraps in there for them to eat, as they quickly run out!  It is also a pain when it comes time to change their water or food, as you have to climb into the run, which is under 3 feet tall, to get to the food and water.  With a feeding door on top we can now throw scraps in without them getting out, and we can hang the waterer and feeder from the 2×4 next to the door for easy filling.  Sadly, I only realized after getting far into the project that I will have to put some sort of roof on this to keep the food from getting wet.  Another project for another day. 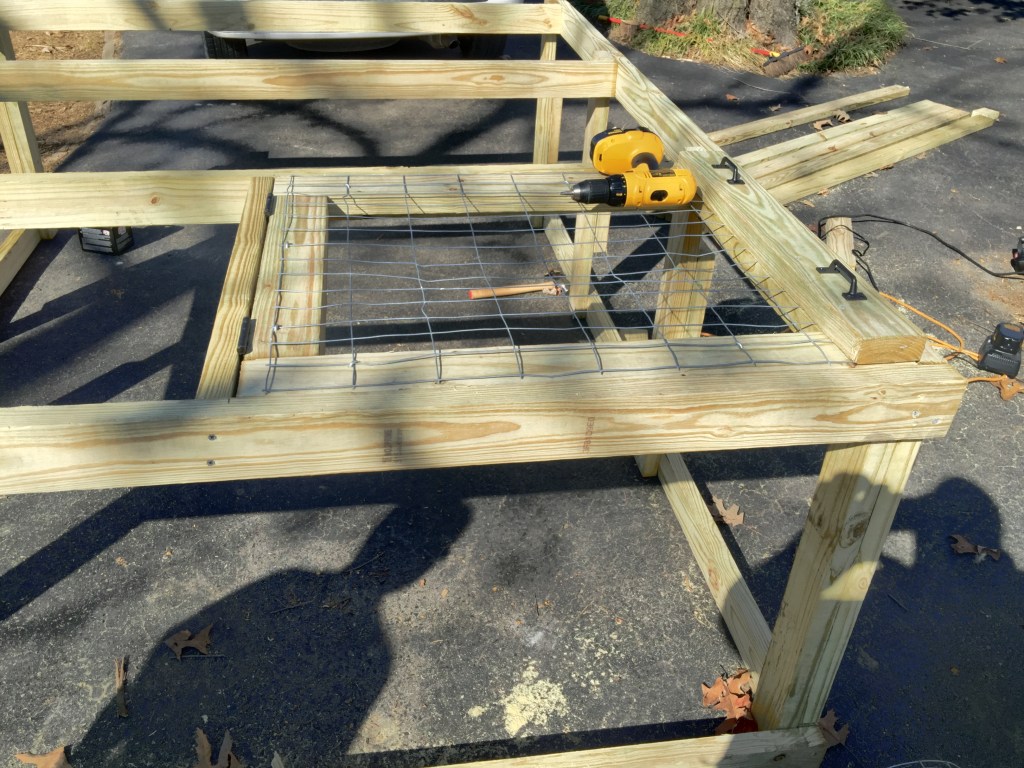 As mentioned above, we haven’t liked the doors that swing open from the bottom.  This is our new door that will open out to the side.  MUCH more convenient! 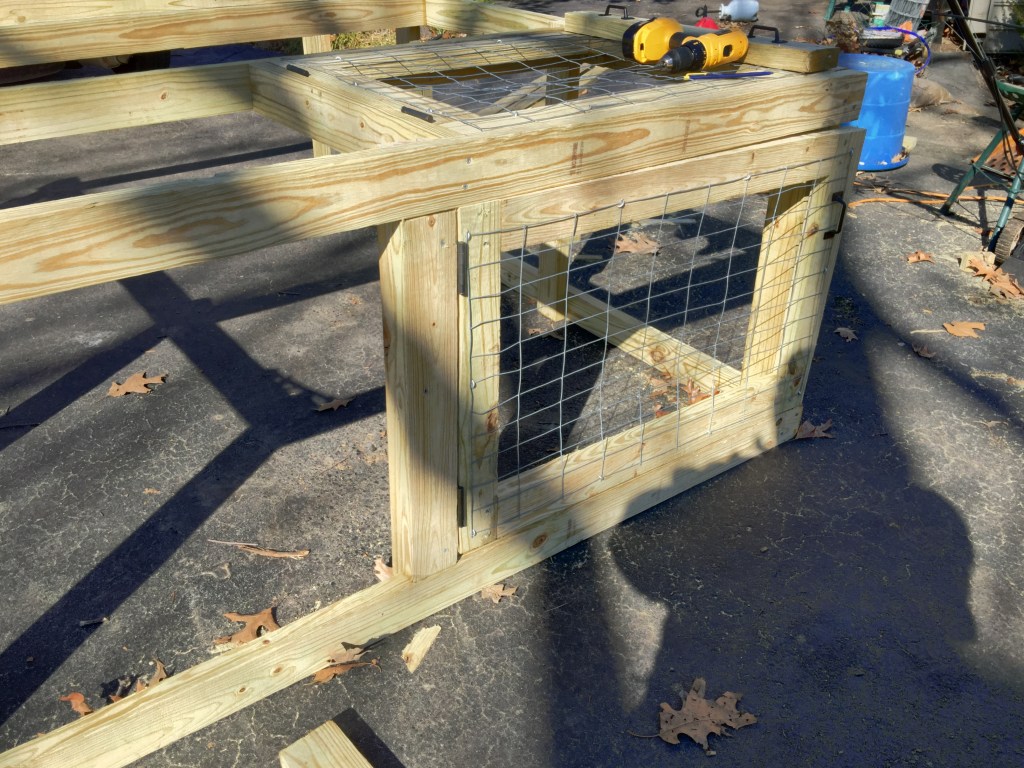 And this is the completed run before we moved it to the coop: 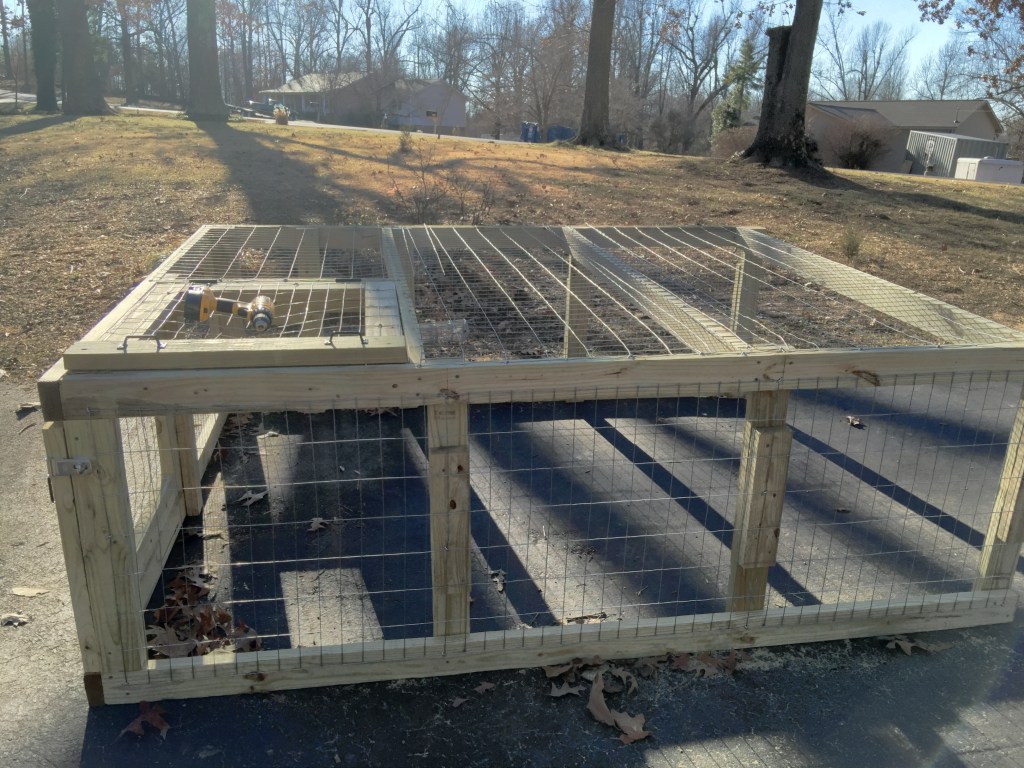 Here it is in place on the northern side of the current run.  You can see it effectively doubled the side of the run, giving the girls a lot more area to roam, including the ability to get out in the sun more. 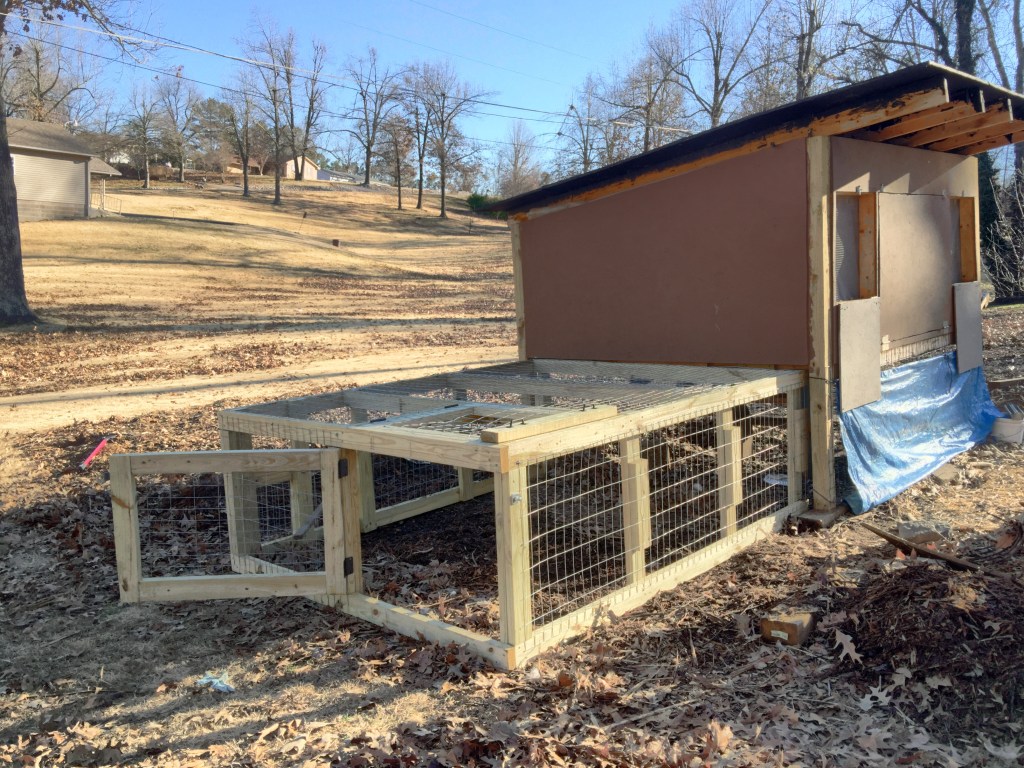 After we installed this, the ladies spent the rest of the afternoon poking around in the new area.  I take that as a sign they were happy.  😀 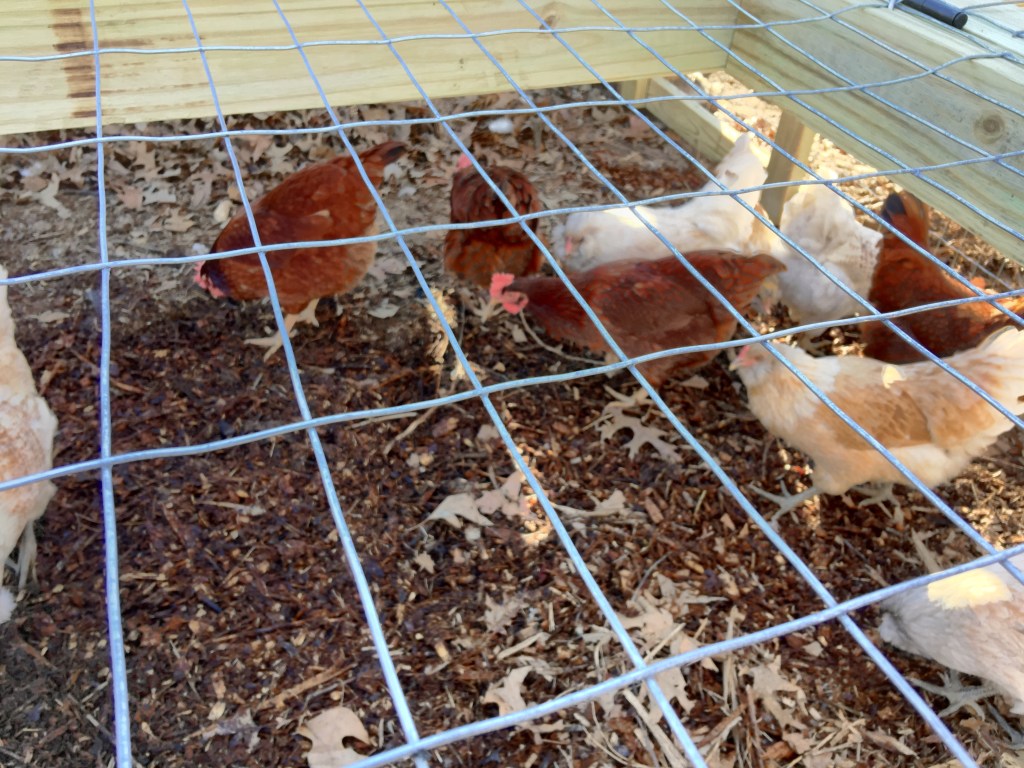 I was a bit worried they may try to roost outside, as it was such a mild day and evening, but apparently the events of the day had them all tuckered out.  Nine of the ten are on their roosting pole, while the other is on the other side of the coop hanging out by the watering bowl.  Silly bird! 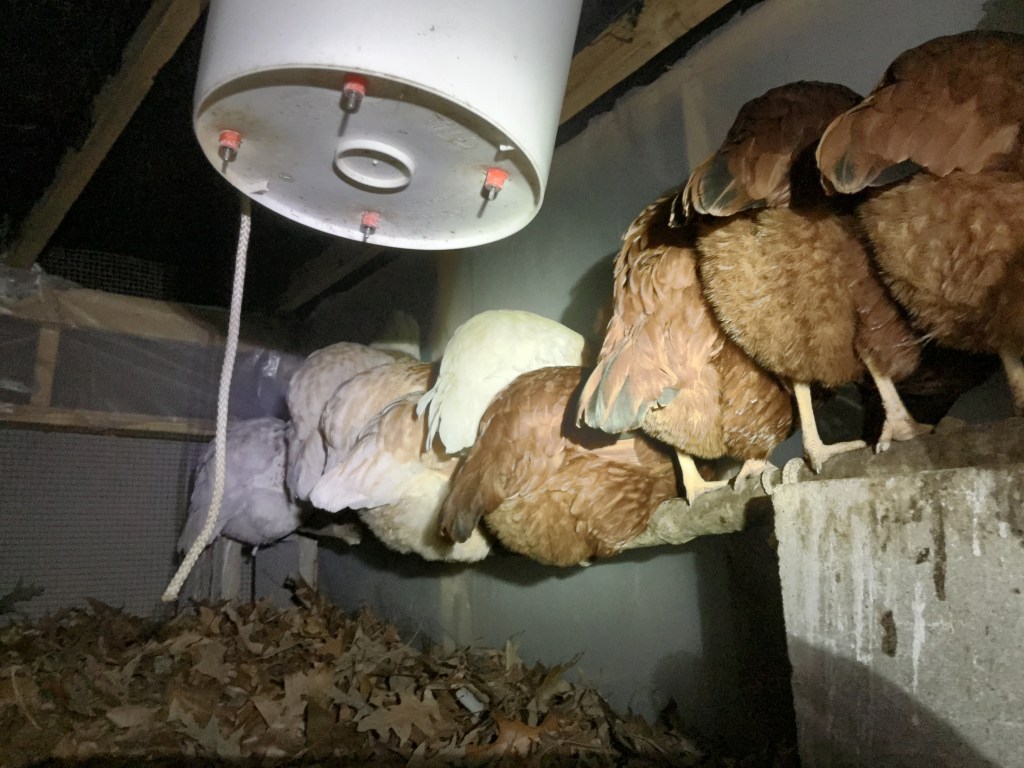 Night, Night. Nine of the Ten Ladies Calling it a Night.

As if this wasn’t enough excitement, the ladies had another increase in egg laying this week.  It seems the Easter Eggers are getting back in the swing of things.

The next two projects are chunnels (chicken tunnels – you are going to enjoy this when I get to it!) and the southern run extension.  It is going to be a weekend or two (or more!) before I get to those projects though.  There are just too many other things to do.