My egg-laying ladies have just finished another record-breaking week.  The new record is 38 eggs, or 3.8 eggs a week per bird.  I am expecting an average next spring of about 5-6 eggs per bird, so we are still several eggs a week short of that, but we are getting there.  If things go as they have in past weeks, they should lay a total of 42-44 eggs this week.

Speaking of records, today they once again tied the record for the most eggs in a day with seven!  This was a special day for another reason though.  We have our first green egg!  All of our Easter Eggers have laid blue eggs so far, with the possible exception of a possible pink layer (time will tell if it is a Rhode Island Red with a light-colored egg or not), but we haven’t had a green egg yet.  What that tells me is that we now have a new layer!  Woot!  Let me share a picture: 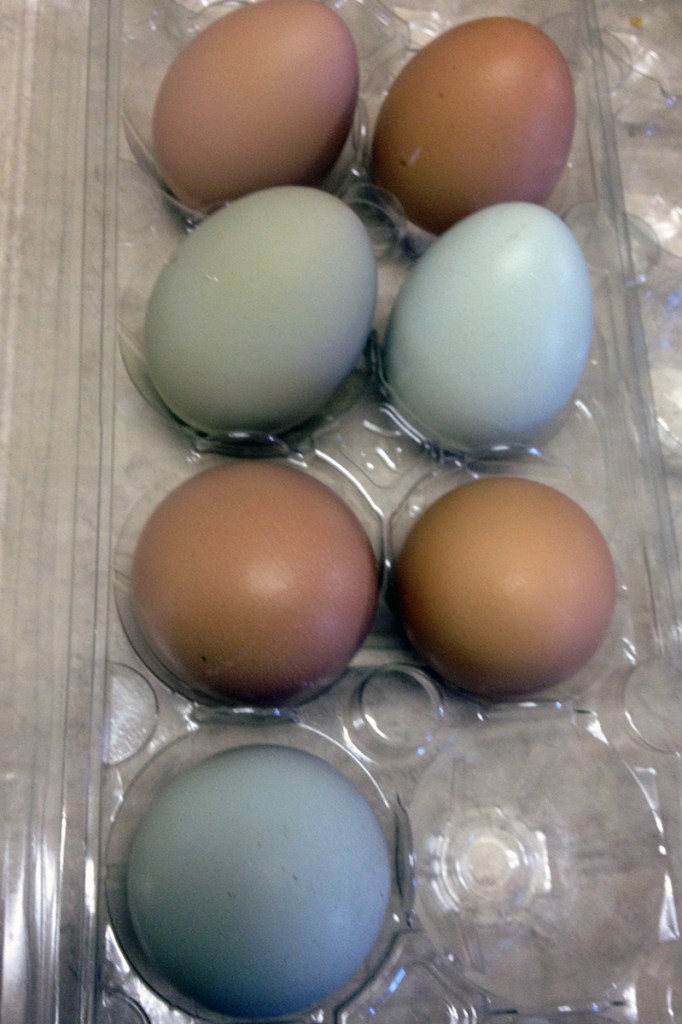 Seven eggs, including a new green one.

The color isn’t perfect in this picture, but the green egg is the second one from the top on the left.

Speaking of that, did you know that a chicken will, more or less, lay the same color egg daily?  I think this is probably most pronounced in Aracanas, Americanas, or Easter Eggers since they lay eggs with more varying degrees of color, but it is true for all birds.  In other words, the pink egg I have mentioned above is laid by one bird, which I have yet to identify.  Since I am not around the house when they are laying, the only way I am going to know for sure, I think, is if I find five reddish brown/pink eggs in one day.  If so, then one of them had to have been laid by one of the Easter Eggers since I only have four Rhode Island Reds.  🙂

I think the egg-laying ladies aren’t sure what to do with the change of the seasons.  We are coming out to let them down to their run a little later than we had been due to the later sunrise, and the last few days they have had the coop in an absolute mess, as if they are chomping at the bit to get downstairs.  I would love to just leave the door open, but I also like the added protection it gives in case a raccoon or an opossum gets into the run during the night somehow.”

One last comment on the eggs for now – last night we had breakfast for supper.  There were enough eggs laid in the last few days to feed my entire family.  Woot!

Oh, one last thing!  Maybe you will enjoy this video as much as I did:

View more posts from this author
« The Law of the Circles
Happenings Around the Homestead »
Fatal error: Uncaught Exception: 12: REST API is deprecated for versions v2.1 and higher (12) thrown in /home/content/62/4469462/html/365daysofme/wp-content/plugins/seo-facebook-comments/facebook/base_facebook.php on line 1273