It’s not often I will put a post up here bragging on my boys, but I am really proud of my son, Elijah, and I wanted to share it here.  He plays for an eight-man football team, and his job is normally to knock a hole in the other team’s line.  He is usually one of the biggest young men on the field, but that was not the case this last Friday night when they played the Pleasant View Christian Academy Warriors.  This picture gives you an idea what he was facing (he is number 75): 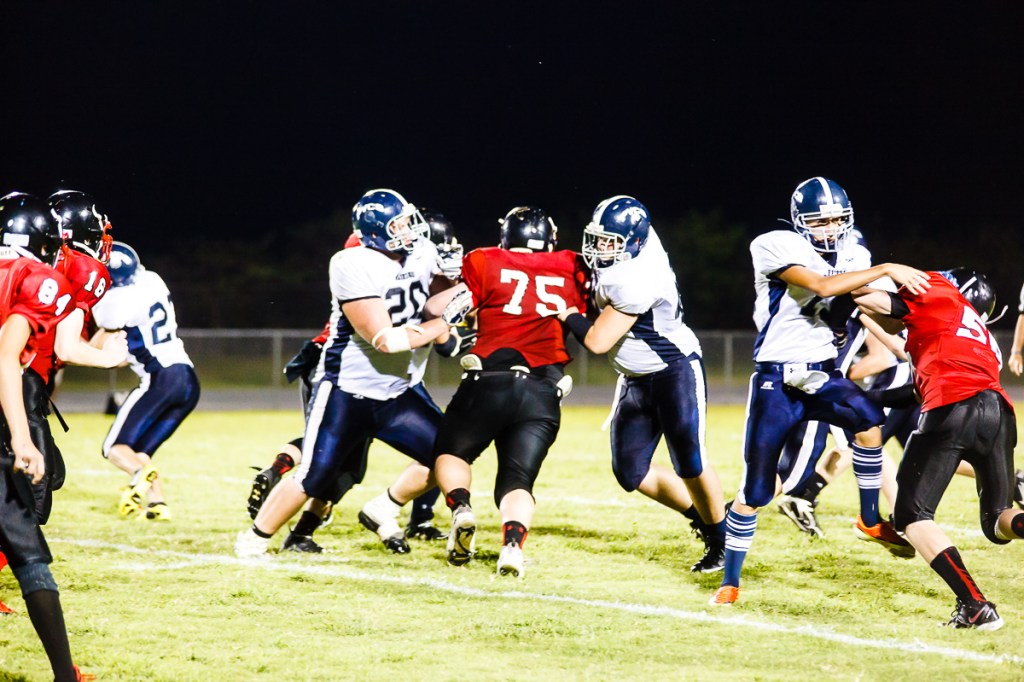 At 6’2″, Elijah doesn’t normally young men larger than him, but you can see he had his hands full at this game.

At one point in the game I saw Elijah do something I had never seen before – he ripped through the other teams line and was near the group doing the tackling.  I asked one of the coaches what happened, and Coach Acree said something like, “I am not sure if he got the tackle, but he tore a serious hole in the other team’s line.  If he didn’t get the tackle, he was a big reason it happened.”

As you can imagine, I was beaming.  I honestly didn’t see him play a role in the tackle itself, but that he was close was enough to make me smile.  He often doesn’t get that chance.  As I said earlier, his job is almost always to make a hole.

That evening and the next morning Elijah kept saying, “I think I pushed the guy with the ball over.”  Finally, I started sorting through the pictures, and found Elijah was right.  Check out this sequence: 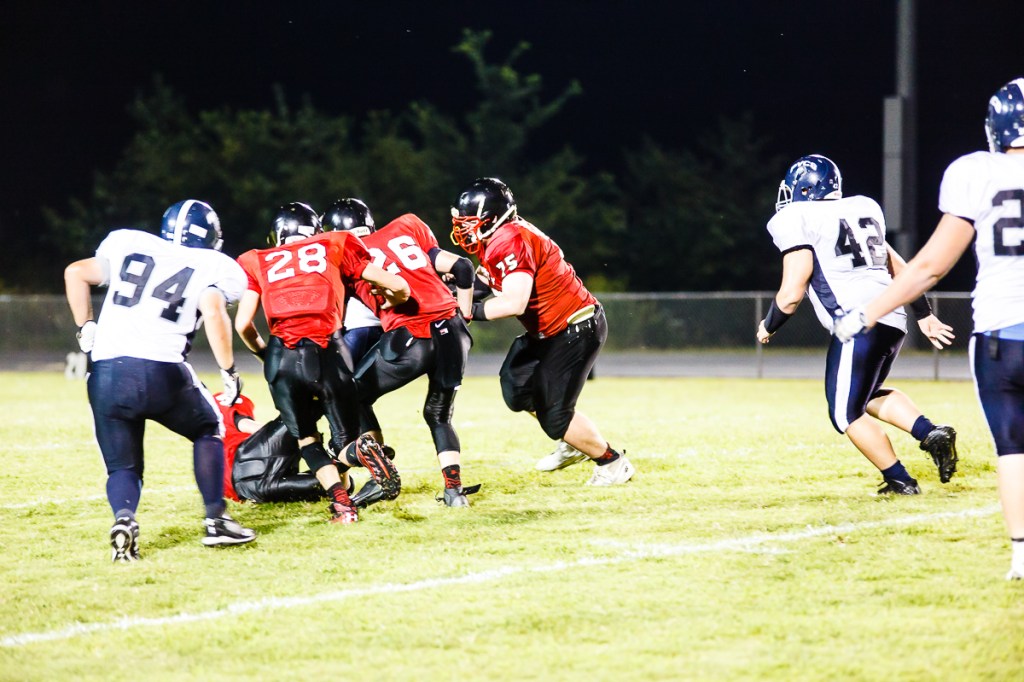 Elijah’s teammates are already on the guy with the ball, but he isn’t going down. Elijah is coming in from the right. 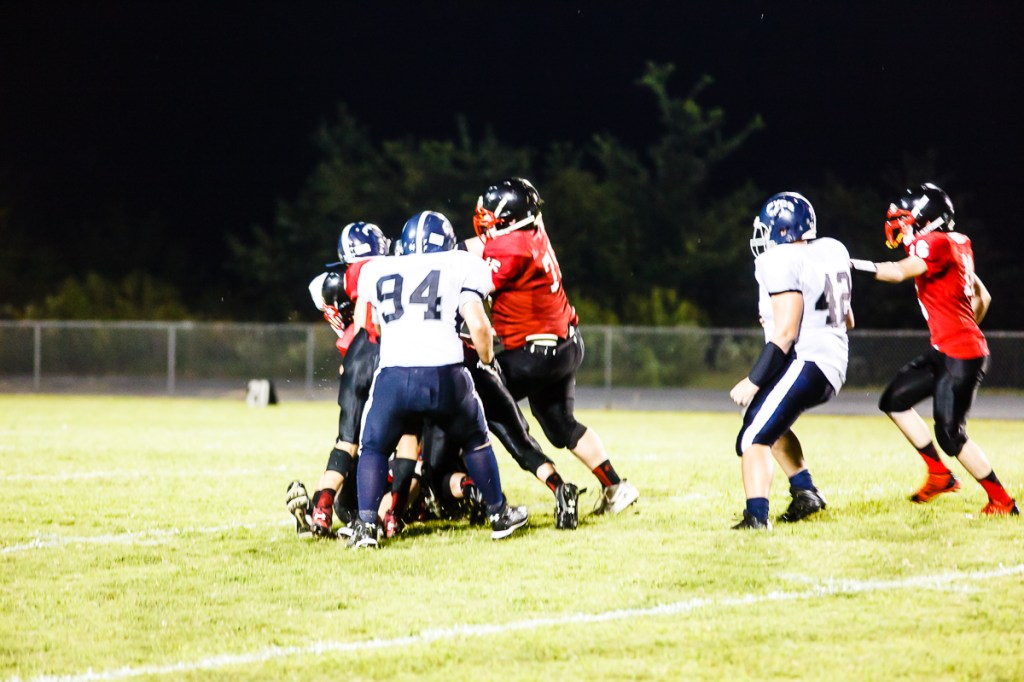 Here you can see Elijah in the mix, and his body tells the story – he is pushing. 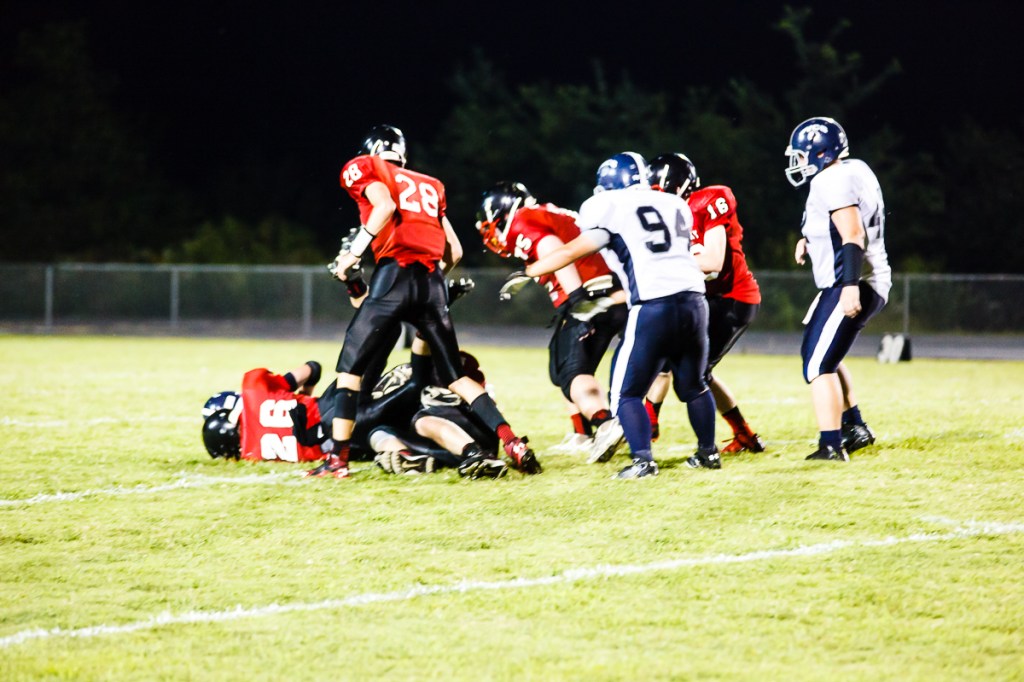 Here Elijah is regaining his balance after the young man with the ball and our #26 hit the ground.

There is no doubt, this wasn’t a solo effort.  Our boys, #26, #28, and at least one more on the ground all helped with the tackle, but to see that Elijah played a role in it has made my day.

I honestly don’t know a lot about football, but a part of me wishes this wasn’t his senior year.  To me he seems to be really playing a bigger role as of late, especially the last two games.  There aren’t many more games left in our season, so I am hoping that continues.  Who knows, perhaps this proud dad will have another opportunity to share another picture or two.

View more posts from this author
« Happenings Around the Homestead
9 Easy-to-Steal Habits of the Super Successful »
Fatal error: Uncaught Exception: 12: REST API is deprecated for versions v2.1 and higher (12) thrown in /home/content/62/4469462/html/365daysofme/wp-content/plugins/seo-facebook-comments/facebook/base_facebook.php on line 1273