The ladies have really stepped it up this week.  Their previous record on eggs was 25 a week, and this week they layed seven more, upping that record to 32!  The most interesting thing is the Easter Eggers are hardly laying at all yet.  They are only averaging 2.3 eggs a week per bird, and once they are laying at full capacity this should be around 5 eggs a week per bird.

Oh, I do have an egg pic to share this week.  This is from their record day of SEVEN EGGS! 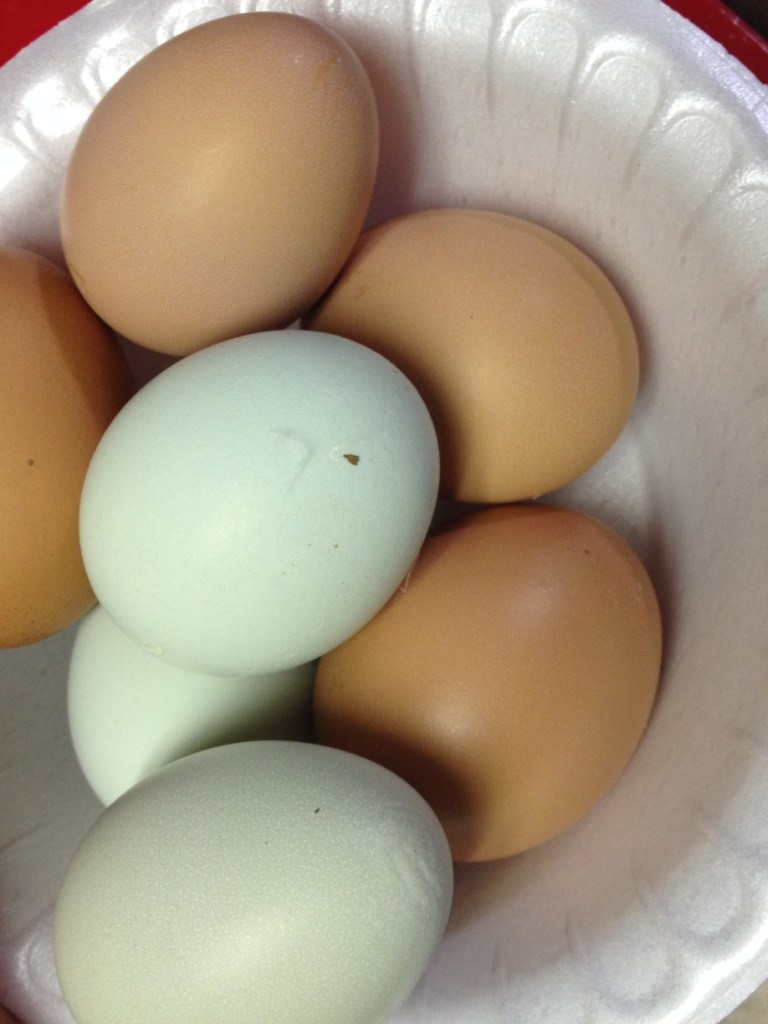 Seven eggs! This is the most we have gotten in a single day to this point.

Even though the run is secure, we have always locked the ladies in their coop at the end of the day.  I figure that this is an added layer of security if a raccoon or opossum gets into the run during the night.  Well, about a week or so ago we found two birds hanging out below the coop in the run when we went down to let them out in the morning!  These two ladies had presumably suffered all night outside of the coop.  Determined this would never happen again, we have been diligently watching for this at night.  Well, on Saturday night when we went down to shut the door, there were two of the Easter Eggers sleeping on a roosting pole in the run!  Those silly ladies!  We ended up leaving the door open that night, but going forward we will pull that roosting pole out toward the end of the day to prevent this from happening again.

The ladies are getting more brave.  I might have mentioned this last week, but I will say it here again.  In the past, they would stay all together and relatively close to the run when we let them out to stretch their wings and eat some grass.  In fact, let me back up.  In the beginning, we would move them from the run to a dog cage, where they could get fresh grass, but be protected.  As soon as we were confident that they could take care of themselves, we began letting them run in the yard, but what did they do?  They ran to the dog cage!  Finally they got past that, and then they would all hang close to the run together.  Then they started wandering a little further away, but generally together.  Now they are going all over the back yard, and sometimes they are going solo.  It’s nice to see them getting more brave, but it also makes it harder to round them up to go back in the run.

All this typing about them running around the yard is making me long for the proper homestead property even more.  One day …

View more posts from this author
« iPhone Tips and Tricks
Happenings Around the Homestead »
Fatal error: Uncaught Exception: 12: REST API is deprecated for versions v2.1 and higher (12) thrown in /home/content/62/4469462/html/365daysofme/wp-content/plugins/seo-facebook-comments/facebook/base_facebook.php on line 1273