Wow, the growing season sure is coming to a close quickly.  I noticed our tomatoes are starting to look very ragged, and the popcorn patch is now totally done.  In fact, I cut down the stalks yesterday, and layed them on the ground to start decomposing.  Even though the Cherokee White Flour Corn is not done yet, I also cut two rows of it down yesterday.

I do need to try to get some radishes and lettuce planted.  It is Sunday as I write this, and I may not update this post before I put it on the blog, but by the time this is published I hope to have started some of both to keep through the winter in a make-shift greenhouse.  I did that one year, and we actually ate fresh lettuce all day long, even though there were many days of very cold weather.  As I am typing this, I am convincing myself that I should probably go out and do that today.

Speaking of chores, I need to repot some of my mint.  I have made square foot garden beds out of cinder blocks, and I grow mint in those cinder blocks, but it is obvious some of the mint plants need to be repotted.  I think they are beginnning to look leggy and straggly.  I generally use potting soil to fill the new cinder block holes, and I don’t think I have any right now, so I may or may not get to this over this weekend.

One of the other chores I have this weekend is to measure my garden beds.  I have done this before, but honestly, I have no idea where I documented that.  I’m measuring because I want to make better use of my space next year, particularly for the corn.  Corn is a crop that suffers badly from inbreeding depression, and to prevent that you need at least 200 plants.  If I plant the popcorn at the proper spacing, I think I can do that in one of my garden beds.  The Cherokee White Flour Corn and the Cherokee Gourdseed Corn are a different subject.  It seems for those corns to fourish, they need more space per plant, which I will seek to give them this year.  To do that though, it will mean I may have to expand my garden or I may have to keep ordering some seed every year to ensure I don’t allow inbreeding depression with these plants.

Oh, that reminds me!  Let me show you one of the Cherokee Gourdseed Corn cobs: 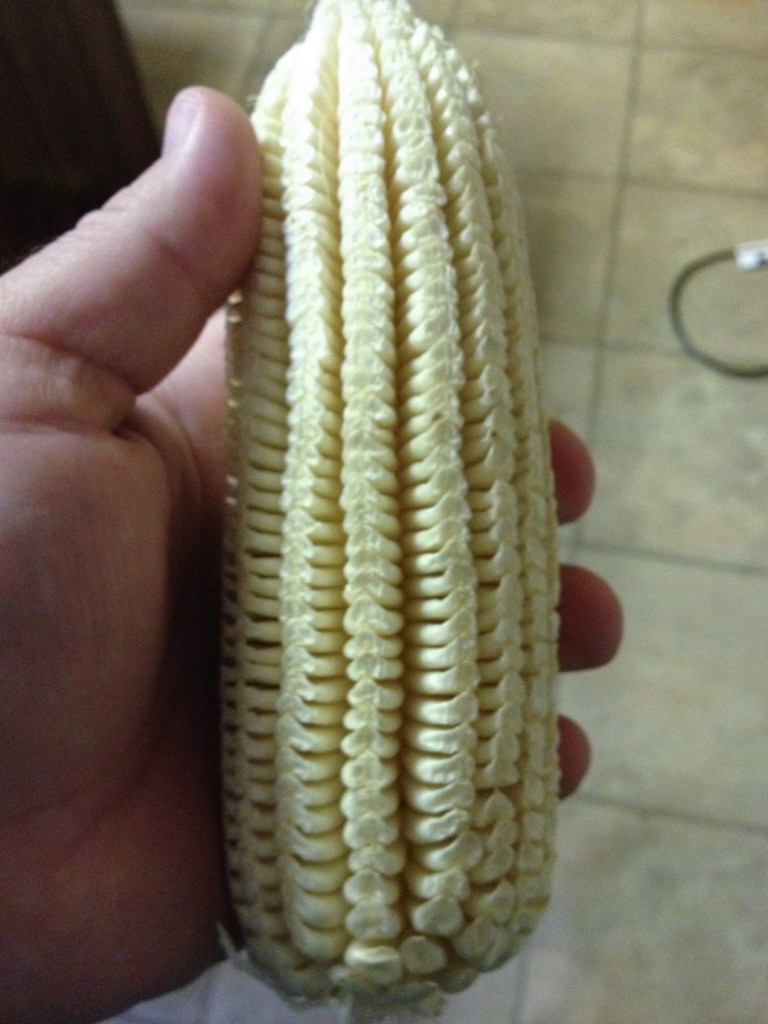 Look at those kernels!  It looks nothing like any other corn I have seen, and it is supposed to make some a-maizing 🙂 cornmeal.  It is also supposed to be very easy to shuck, though I might not know that for a few more months.  Who knows though, if I get impatient enough, I might find out in a few weeks.  🙂

Speaking of corn, I am way behind and I am still testing popcorn from last year.  As I type that, I am sure you are wondering what I mean, and I am probably needing to write a post on that sometime.  For now, just know that I am testing my popcorn for poppability and other factors.  I then only save the seed from the best of it, which makes for better popcorn year over year.  At this rate, I will not be done testing 2013’s corn until sometime in October.  I am going to be more concerted in my efforts with this year’s crops though, and I will try to be done testing it by the end of this year.

Wow, this post is already getting a little long and there is so much more to say.  I’ll just have to save that for later.

View more posts from this author
« The Chicken Chronicles
The Joy of Home Coffee Roasting »
Fatal error: Uncaught Exception: 12: REST API is deprecated for versions v2.1 and higher (12) thrown in /home/content/62/4469462/html/365daysofme/wp-content/plugins/seo-facebook-comments/facebook/base_facebook.php on line 1273