WOW!  I can’t tell you how excited I was yesterday to find out that we had not just one more egg (see: My Surprise for the Day), but THREE MORE EGGS!  Not only that, but one of the Easter Eggers, we believe it was Blondie, laid an egg! 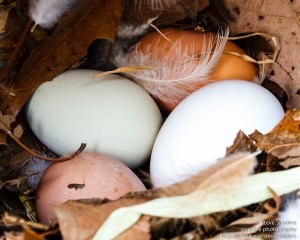 Henry Ford, referring to the Model T, reportedly once said, “Any customer can have a car painted any color that he wants so long as it is black.”  That is much like eggs, isn’t it?  Almost all of them are white, though the stores have found ways to upsell anything brown in color.  The one thing that I haven’t seen in the stores yet, however, is a blue/green shade of egg.  Even so, there are breeds of chickens which lay this color naturally.

You will notice four eggs in the picture, the largest of which is a store-bought, large, white egg that I placed in one of the laying boxes to encourage the chickens to lay there.  The other three, however, were all from yesterday.  The one at the 7:00 position in the picture looks identical to the one yesterday in color and size.  The next one going clockwise, at about the 10:00 position, is the first Easter Egger egg.  The next one going clockwise is perhaps a little smaller than the other ones, and it is a little more elongated.  I would say all three are similar in size to a small store-bought egg.

If I understand it right, there are probably three hens laying right now, one of which has layed two days in a row.  I expect all three will now start giving 5-7 eggs a week, or a total of 15-21 eggs a week.  The other seven hens should start laying soon, perhaps more will even lay today.

My family thinks I am a complete dork, but I am so excited about this.

View more posts from this author
« Happenings Around the Homestead
My Surprise for the Day »
Fatal error: Uncaught Exception: 12: REST API is deprecated for versions v2.1 and higher (12) thrown in /home/content/62/4469462/html/365daysofme/wp-content/plugins/seo-facebook-comments/facebook/base_facebook.php on line 1273