My Surprise for the Day

You will never guess what I found yesterday!

I was out in the garden making my rounds.  I had just finished picking okra and cucumbers, and was on my way to the tomatoes, but I decided to make a stop off at the hen house to check on the ladies.

Lately I have made it a practice to open the nesting box door to see if there has been any interest in the nesting boxes.  It is about time for the Easter Eggers to start laying, if I am lucky, and each day I wonder if it is my lucky day.

A few weeks ago I put a store bought egg out there to encourage the ladies to check the boxes out, but the activity has been minimal.  Even so, sometimes the white egg appears to be gone, though it is always just buried in the leaves in the nesting box.

As I opened the nesting box door yesterday, the silly white egg was gone again.  I dug around in the leaves and found it, then carefully placed it back on top of the leaves.  As I was preparing to close the door, low and behold I noticed a chicken!  She was laying at the opposite end of the boxes and had burrowed out a nest.  I quickly closed the door and made my way to the house.

It wasn’t much longer until we heard cackling commencing!  One or more of the girls sounded as if she was having a total come apart.  🙂

We went on to church, expecting we might have a little surprise when we arrived home after church.  Sure enough, we did!  We all eagerly went to the hen house as soon as we arrived home, me with camera in hand.  🙂  Here’s what we found: 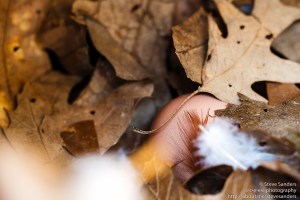 You will notice, perhaps, this is not an Easter Egger! That is right! One of the Rhode Island Reds was the first layer. Unfortunately, I can’t tell these birds apart, so it could have been any one of the four. 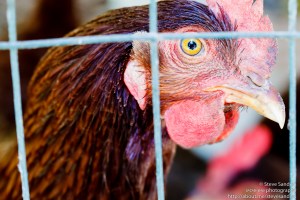 Here’s a couple of more shots: a better one of the egg, and a comparison shot vs. a store-bought, large, white egg. 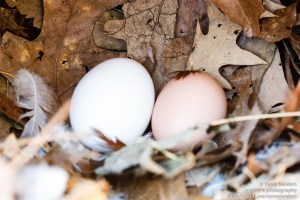 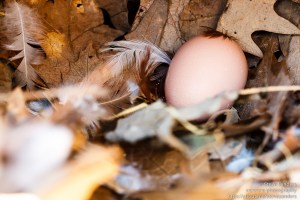 Our First Egg – A Better View

With any luck, the Easter Eggers will be laying soon too, along with the rest of the Rhode Island Reds, and we will start having a beautiful mix of brown and blue/green eggs soon.

Those who raise chickens often say the first egg costs many hundred dollars, but those thereafter are inexpensive. I haven’t calculated the cost of this first egg, but I know why people say that. It wasn’t cheap getting to this point, but those are sunk costs. Now I just have healthy, inexpensive eggs that come from chicken who get time to free-range daily.