Have you ever heard of Stickball?  No, I don’t mean baseball, and I don’t mean lacrosse.  The Choctaw Indians, as well as some other tribes, play a game called Stickball.  Though I am probably off a little on the specifics, it is roughly 100 people on a football sized field, each with two stick with a tiny basket on the end.  The players are attempting to get a ball about the size of a golfball from one end of the field to the other without using their hands: throwing, scooping, and carrying, though you wouldn’t want to carry the ball far.  You see, if you are carrying the ball, you are fair game for something like a tackle in football, though much more rough.

By the time this post goes live, my family, my home-based church, and several other folks will be watching the final game of the World Series of Stickball.  They don’t play the final game until late in the evening, so we may not stay to watch it all, though my plans are to do so.

Last year it was amazing to watch the teams come on the field.  There were so many players, and the teams were generally led by drummers who pounded on their war drums.  The players hit their sticks together in a most menacing way, letting out war cries as they took the field.  This is, to these young men, no game.  They are here to win.

This is a picture of a player from the winning team last year, which was Beaver Dam: 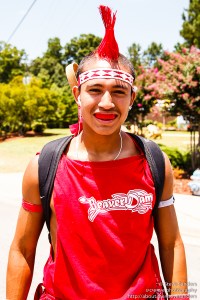 A player from Beaver Dam prior to the game.

And last year’s runners up prior to the final game: 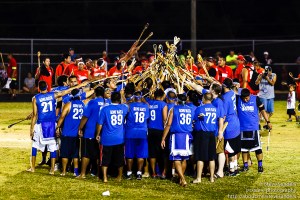 Koni Hata before the game

And finally, some action from the final game: 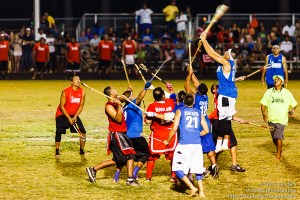 This year the final game is Saturday, July 12th, and will start sometime after this post goes live.  With any luck Bok Cito (Bogue Chitto) will be in the final match.  Lot’s of love to that team, which is the town where our mission trip is based. UPDATE: Bok Cito won in the semi-finals against last year’s champion, Beaver Dam. They will face Pearl River tonight in the finals.

View more posts from this author
« Making Stickballs
Today is the Day! »
Fatal error: Uncaught Exception: 12: REST API is deprecated for versions v2.1 and higher (12) thrown in /home/content/62/4469462/html/365daysofme/wp-content/plugins/seo-facebook-comments/facebook/base_facebook.php on line 1273